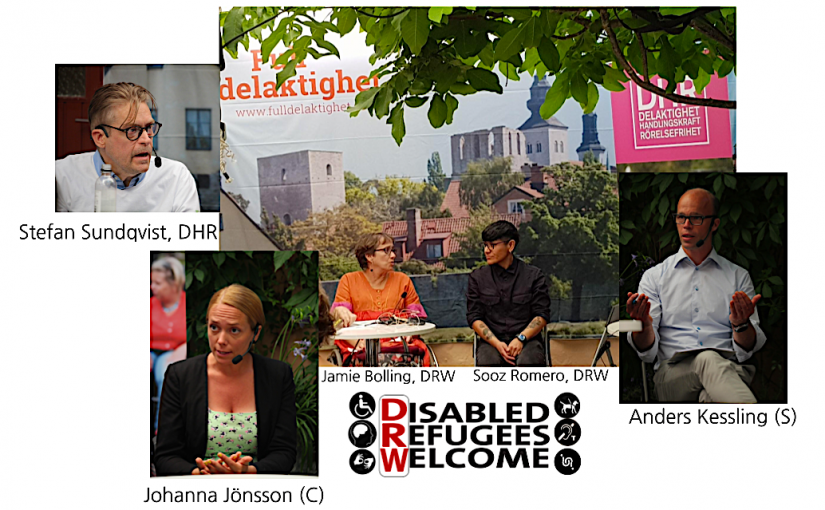 Better interviews from the start, and better cooperation between authorities; these were often the proposed solutions to the problems discussed at Disabled Refugees Welcomes’s seminar at the Almedalen Week. Non-normative abilities and needs for support should be identified at an early stage with this method.

Anders Kessling, State Secretary to the Minister for Employment and Integration Ylva Johansson (S), called for better cooperation between different authorities, for example, between the Swedish Public Employment Service and Health and Medical Services.

Johanna Jönsson, Member of Parliament and spokesperson on migration issues (C) have high hopes on the Inquiry on the reception and housing of applicants for asylum and newly arrived migrants, which, according to her, has remedies for a ”whole series of issues”. The inquiry proposes, among other things, that the newcomers should stay at the same place during the first weeks, where representatives for different authorities also will be present.

”Work is the linchpin”

Sooz Romero, method developer at DRW, raised the issue of societal attitudes, that newcomers are ”talked about as if they do not want to work but have come here to live on benefits”. Sooz means that we politically have embraced this discourse and that the New Moderates’ proposal, where newcomers would need to qualify before receiving social insurance benefits (as reported by Assistanskoll), is part of this.

Johanna Jönsson responded that The Centre Party also have similar proposals and that some of these proposals already have been implemented, in cooperation with the government. Newcomers cannot have ”larger advantages than if you are a resident in Sweden”, she said.

Anders Kessling said that ”work is the linchpin”.

The moderator, Stefan Sundqvist, DHR gave a reminder that the obstacles for disabled people generally are much higher, which is visible, for example, in the unemployment statistics where unemployment for disabled people on average is 80 per cent irrespective of the market situation. Anders Kessling responded that this is why it is crucial with a special policy for the issue.

Both Anders Kessling and Johanna Jönsson strongly object to the idea of ”we and them” and the view that newcomers do not want to work. Johanna Jönsson also said that she hears ”such noise” now and again.

Another big problem is that newcomers are forced to relocate several times. Jamie
Bolling, project manager, DRW recounted that a young woman with extensive non-normative abilities had to relocate seven times during a year. Sverker Ågren, an audience member with experience of working at the Swedish Migration Agency, said that the problems had severely increased during the latter years, and he did not subscribe to the argument that this was only due to the large numbers of newcomers during these years.

Anders Kessling said that this is of course not acceptable, but the Swedish Migration Agency is in charge of this issue.

Johanna Jönsson said that the relocations are a problem for the entire society and pointed, among other things, to schools that have not been able to plan their activities and authorities unable to work long-term. She brings up the Inquiry on the reception and housing of applicants for asylum and newly arrived immigrants again.

One issue where the Social Democrats and the Centre Party differ from each other concerns restrictions on family reunification. The issue is really applicable for all newcomers but, as Sooz Romero said, “as usual it hits much harder against disabled people”. Johanna Jönsson noted that the Centre Party is totally against these restrictions, and are highly critical of the government.

Anders Kessling responded that they want to wait for the decision at the EU-level, and continues:

Next summer the Temporary Reception of Asylum Seekers Act expires, and then Johanna Jönsson wants to see a change:

Anders Kessling said that the Social Democrats was open for discussions after the election.