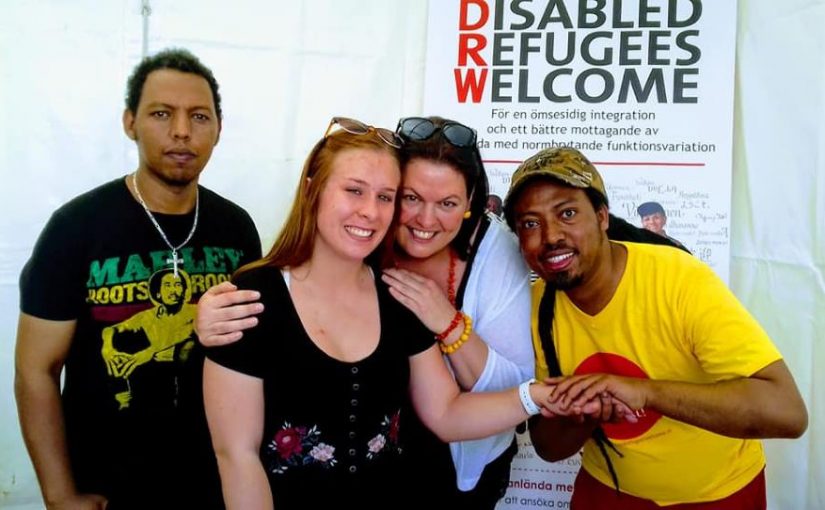 Disabled Refugees Welcome project participated in the Järvaveckan for the first time from the 12th of June until the 16th of June. Järvaveckan is about reducing the distance between people and elected representatives. The living hub of Järvaveckan is a great meeting place for community engagement. Companies, associations, authorities, organizations, politicians and citizens are invited to create dynamic meetings and conversations between community actors and citizens – both from the area of Järva and from the rest of the city of Stockholm as well from the whole country of Sweden. This year was the third time the event was held and the 2019 edition of Järvaveckan marked a record number of visitors with 52 981 persons coming. This broken down is as follows:

The DRW team manned a tent during the Järvaveckan with team members taking turns each day. The team explained to the visitors what the DRW project entails. Flyers and brochures in different languages were handed out to visitors. A raffle ticket could be bought to win a painting from Bengt Elmén, a STIL member and cartoonist. Julius Ntobuah, a member of DRW team, whose experiences of coming to Europe as a disabled asylum seeker was converted into two paintings. One painting is about Julius’ experience with inaccessibility in the refugee camp in Greece and the other painting is about Julius experience with inaccessibility in the Swedish refugee camp. Money raised from the sale of raffle tickets will go to the DRW activities benefitting the DRW target group.

DRW project participant Sisay Game Beyene came down from Umeå to join the DRW team at Järvaveckan. Sisay Game Beyene was one of the first DRW project participants. Sisay has been very active with the DRW and is interested in supporting DRW for example in the work at Järvavecka and even in Almedalen. Sisay has learned Swedish and has gotten a job. He will soon be working as a teacher in the north of Sweden. Sisay played a key role at the DRW tent by explaining what DRW is in Tigrinska to visitors from Eretria and Ethiopia.

Another great DRW volunteer is Mai who supports the project for translation for arabic speakers. Mai waved down arabic speaking people to tell them about DRW. Mai’s strategy got immediate result as she attracted a big Arabic news TV station in Sweden. Mai was Interviewed for the TV news channel and explained in arabic how the Project DRW is working, as well as aims and goals of DRW project. (interview here with Mai)

Independent Living has the visit of three interns from Canada and the USA. They too manned the DRW tent, Caitlyn and Brooke from the USA, Alex from Canada. All three of the interns did a very good job by explaining to English speakers what the DRW project is about, its goals and aims and handed out DRW flyers and brochures.

Järvaveckan week was a very exciting week for DRW. The DRW team: