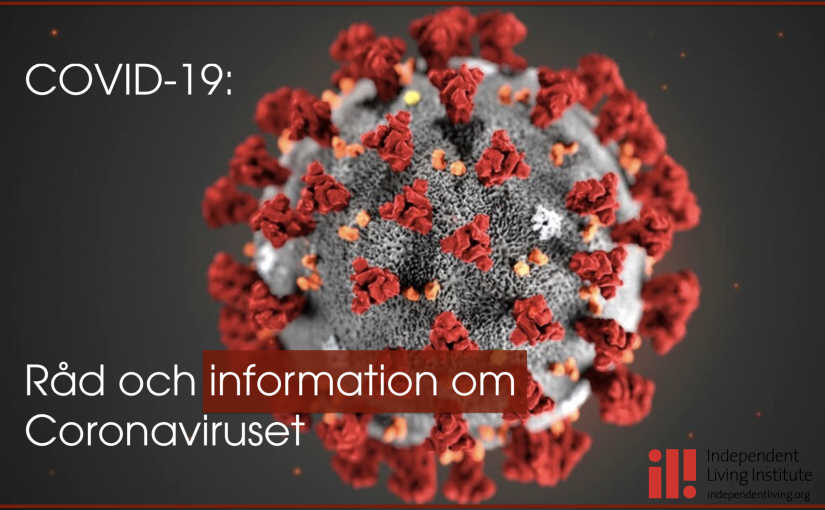 Corona – Covid 19 is a world pandemic and crisis for all countries. This both as the healthcare systems are overloaded and people are dying. We are also in a world economic crisis to which we do not see the end nor grasp the results.

This pod is an attempt to spread information to persons speaking amarhiska. We know that it is important that everyone in Sweden accesses information on Corona so that we together can each take our responsibility in preventing Corona from spreading too fast. We need to do this to save lives; so that the Swedish medical system can cope with the people who get sick.

What are we supposed to do?
– Stay home if we are sick!
– Work from home if we can.
– After we go out – Wash our hands. Wash them well – for at least 30 seconds. Wash our hands often. Don’t touch our face.
– Avoid meeting older persons who are among the high-risk group.
– The elderly is to stay home and to limit contact with other persons.

What is a Pandemic?
– An epidemic that spreads across the world – Pan is the world.

Corona or Covid 19 is a virus not a bacterium, which is very contagious and can be deadly. It is spreading in Sweden, especially in Stockholm. Most people will get well and only get mildly sick.

Sweden has not done as other countries forbidding people from going out to work, to restaurants and other places. Sweden has not closed the schools for the younger children. But Sweden has asked people to stay at home when they are sick and to work from home if they can. Sweden’s way of dealing with Corona has begun to be called the Swedish experiment. It is different to how other countries have acted. The reasons behind this is that the government believes that a total quarantine would not give better results and would be very difficult. Asking people to take their responsibility is the way the Swedish culture deals with many situations and it gives results. People do not need to be forced into doing something, they can make their own decisions for the better of everyone. Most people listen.

The symptoms of Covid 19 are like a normal flu with high fever – tiredness, sore throat, runny nose, cough. But the fever lasts longer and is high! Another difference is that the virus attacks the lungs and locates itself deeply in the lungs making breathing difficult. Some people get pneumonia. Most people get a light case of Covid 19 but there is a larger press on the Swedish health care system with many people needing intensive care at the same time. In Sweden 4435 persons have tested positive and 180 people have died. These are mostly elderly persons.

The disease started with people coming home to Sweden from skiing vacations in Italy. In Italy many people are sick, and many have died. The virus is still spreading. Italy has been hit hard with 101 739 people being sick and 11 591 people who have died. (figures from 30 march).

This information is not to scare people but for us to know that we are talking about something very serious.

Corona is spreading swiftly within Sweden, in the last week 1982 persons have gotten sick. The authorities are trying to slow the pace of the spreading of the disease so not too many people are sick at the same time. As Covid 19 spreads quickly there is a risk of having too many persons in the hospital. Beds for intensive care are limited. Temporary hospitals are being constructed around the country. In Stockholm there will be a temporary hospital in Alvsjö, in the exhibition hall for example. The military are building temporary hospitals around the country allowing for more beds when many people do get sick.

Due to this crisis precautions are being taken. There are cancelations of operations considered not being life threatening. We have two among the DRW participants’ whose surgeries were canceled due to Corona. They did not understand why and called us to ask why. There is a closing down of some workplaces. Scania has been closed as they do not get parts they need from China. 19000 people have been sent home. There is a limit of 50 persons at events. Before the limit was 500 persons.

Many events have been canceled like Eurovision and the World Cup final in Football. Other events like OS have been postponed – to take place in July. Theaters, plays, air transport are canceled. Universities and gymnasiums are closed. So far, the schools for younger children are still open. There are two reasons for this. Most children do not get sick and the schools are kept open so that parents have somewhere for their children to be so they can for example work in the hospitals. As of the 1 april it is prohibited to visit the homes for the elderly.

Daily there are press meetings at 14:00 to spread information and decisions from the government and at 20:00 on the TV there is a program describing the virus and the world situation.

The EU and Sweden have closed the borders so people from outside of Europe cannot come into Europe. Sooz our colleague is stuck in Ecuador where Sooz and family have been on vacation. Surrounding countries have also closed borders.

The Swedish health authorities are telling people to:
– Stay home if you are sick!
– Work from home if you can.
– After you go out – Wash your hands. Wash them well – for at least 30 seconds. Wash your hands often. Don’t touch your face.
– Avoid meeting older persons who are among the high-risk group.
– The elderly is to stay home and to limit contact with other persons.

The isolation is to keep the virus from spreading too quickly – otherwise the health system can become overloaded. Information says that we will all probably get the virus, but we need together to keep the number of people getting sick at the same time. Most people will only be mildly sick and only a small percent risk dying.

The government has asked people not to travel from one part of the country to the next. There is a worry for Easter which is on its way and a time when people travel for vacation. People travel to ski, visit family and for other reasons. There is a risk to spread the disease from one part of Sweden to another part. There is a risk when many people meet by going to the stores, going to discotheques, riding the ski lifts. Many owners of the lift systems are closing taking Corona into consideration. The government has asked people to stay home for Easter. To prohibit travel is not appropriate in the Swedish culture as I said earlier. But the government is warning people and encouraging people not to put themselves and others in danger by traveling.

The situation in the world is difficult. Italy has prolonged its quarantine people are prohibited from being outside. They can walk their dogs and go to buy groceries. In Germany people can only meet one other person at a time when outside. France has a quarantine with 45 170 cases declared and 7964 deaths. The situation is getting worse in the USA with 161 807 cases and 2978 who have died.

There is some good news: there are no new cases in Wuhan in China since the 22th of March. The area of Wuhan is starting to go back to normal. Japan opened the schools again.

In Italy the percent of people getting well is rising. 80% of those who get sick have mild symptoms. Most people get well.

Thank you for listening!